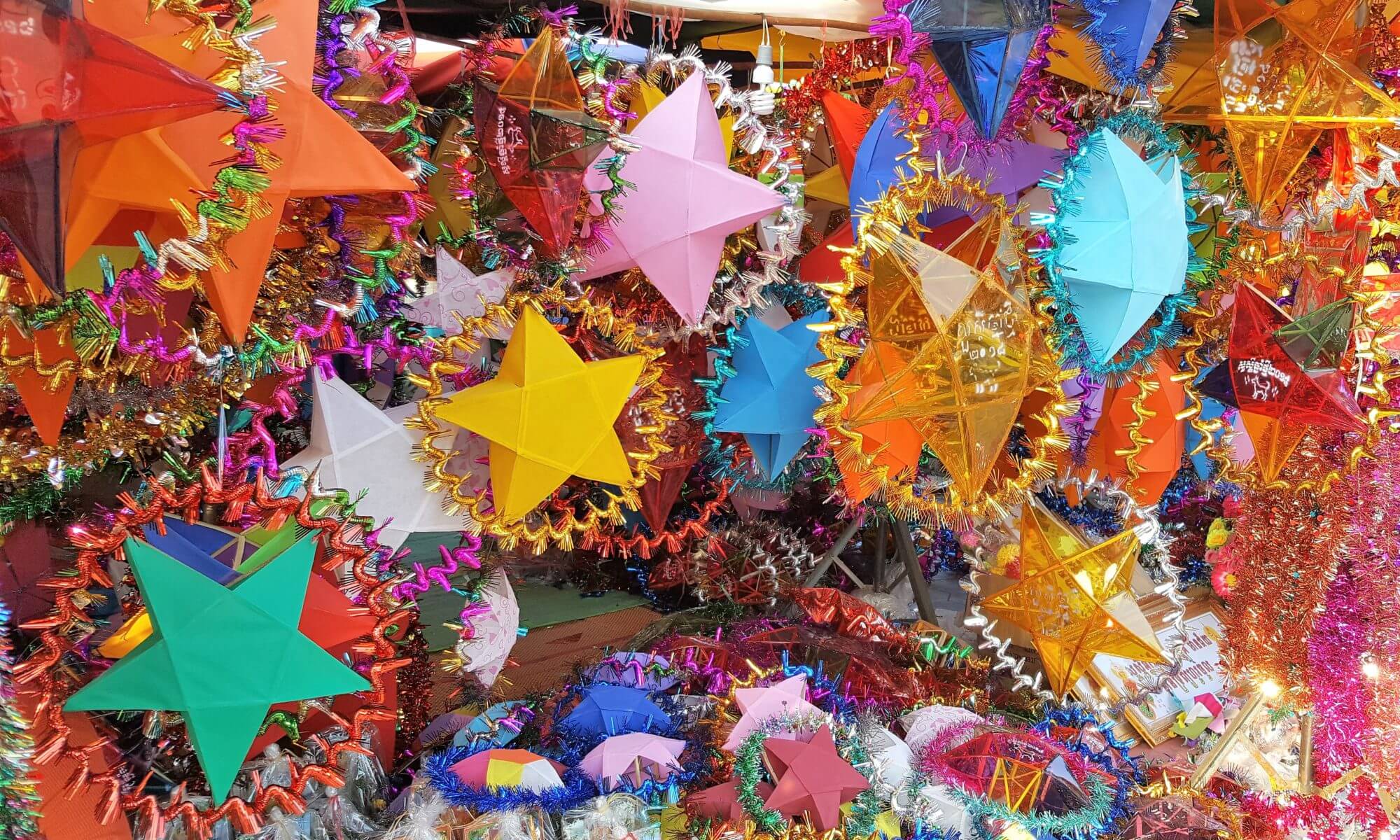 On my travels I have been lucky enough to end up in places when they are having their big annual celebrations; October 2017 in Kolkata for Durga Puja, December 2017 in Sydney  for New Year’s Eve and now April 2018 in Battambang for Khmer New Year.

Actually, this will be New Year celebration number three for 2018; first in Sydney, where everyone celebrated the International New Year according to the Gregorian calendar on the night of 31 December 2017 then second, Chinese New Year on 16 February according to the lunar calendar when we welcomed in the Year of the Dog in Siem Reap.

For Cambodians this is also the Year of the Dog and the date is calculated according to the lunar calendar. However, an ancient king moved the date from February to April because it signifies the end of the rice harvest and the dry season and farmers have time to relax and enjoy the festivities! It is a time when Cambodians get a chance to return home to their provinces and villages. Many Cambodians are economic migrants in their own country, coming into the bigger towns like Battambang, Phnom Penh and Siem Reap to find work. The long weekend gives them the time to go home and be with their families. It would seem that for the rest of the working year they don’t get much chance.

The streets of the towns are decorated with stars and most houses have stars hanging outside. I have asked my students about the significance of the stars and no one could give me an answer. Is it a popular representation of the communist, five-pointed, red star said to represent the five fingers of the workers hand? Heineken also have a red star on their beer label which is said to have been an image used by brewers in the Middle Ages to represent the five ingredients of beer, hops, water, barley, yeast and of course “magic”. I hardly think that there is much connection between the magic of brewing and Cambodia, where the local lager has little to recommend it.

There are three official days to the Khmer New Year. The first day families clean their homes and take food to the pagoda for the monks. The pagoda becomes the social centre of activities and I was interested to hear that traditional games are played like “tug of war” and I saw a man with a lethal-looking cross bow contraption at one of the pagodas I visited which was attracting much attention from the local kids.

There were many stalls around the pagodas and temples for the kids to play fairground games.

On the second day, gifts are exchanged and at the pagoda a mountain of sand is built to represent the stupa where the Buddha is buried. Everyone visits the sand mountain and burns incense and makes donations. The third day is when the real fun starts and something for which I was not prepared although I had heard about it! Traditionally the Buddha statues have a special wash with water and chalk and this is extended to everyone in the family.

Nowadays this has become an excuse for a massive water fight in all the towns and villages with the kids armed to the teeth with water pistols and super-soakers, women and girls line the streets with buckets and bowls of water and the men wield hosepipes. If you haven’t got a water pistol then you have a container of baby powder to shake over everyone.

I went to visit Banan Temple on this day and drove there in an open tuk tuk – what an idiot! I was really not prepared for the water as we drove through the villages – it was simply extraordinary. We could see the water “ambushes” ahead as the traffic slowed down to negotiate a safe path through the spray. Luckily there was a little storage compartment under the seat of the tuk tuk so that we could stow cameras and phones – so taking any photos was out of the question. Banan Temple is about 40 minutes drive from Battambong and I have to say that the journey there was one of the most amusing I have ever undertaken. I arrived soaked to the skin with my abdominal muscles aching from laughing and screaming so much. The roads were full of people driving from one village to another on motorbikes and pickups full of young men armed with water bombs. The atmosphere was so contagious with everyone laughing and smiling – I am amazed that there appeared to be few road traffic accidents!

Somehow it works when the temperature is over 35C – I can’t see it catching on in rural Sussex in the middle of winter!