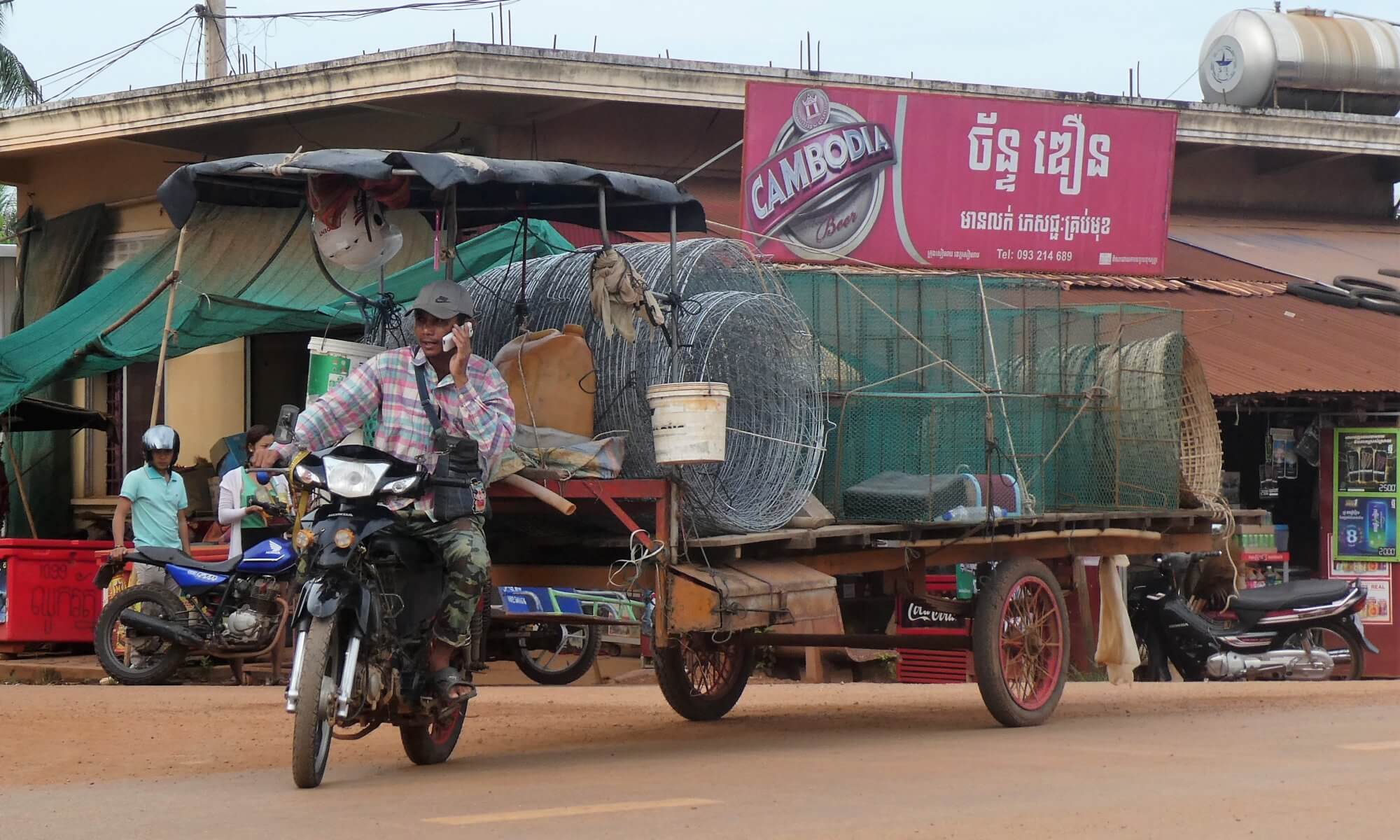 A startling statement on the Lonely Planet website says that “many more people are now killed in road traffic accidents than by landmines in Cambodia”. This is due to two effects, one the continuing successful clearance of mined areas and two, the increase in the number of motorbikes and cars in the country.

Traditional transport was the bullock cart, many of which now adorn hotel forecourts decoratively, although you can occasionally see one out in the more remote villages. Kids and mature ladies still use the bicycle.

However, the middle class in Cambodia is growing and as monthly salaries increase, people are able to save for a motorbike which costs between $1,500 – $2,500. There are 2.7 million registered motorbikes and make up 80% of traffic; motorbikes are the workhorses of most Cambodians – for taking the kids to school, taking your goods to market, pulling a tuk tuk or with a mobile street vendors cart attached.

You don’t need a driving licence to ride a motorbike and the driving style resembles the Cambodian attitude to life of “don’t look back” as they pull straight out into traffic with never a backward glance or use of mirrors. Mirrors serve as useful hangers for sugarcane juice holders and crash helmets!
Traffic rules are non-existent.

Traffic circulates on the right unless there is a shop you wish to go to on the other side of the road, even if it is a dual carriageway, you simply drive down the wrong side of the road and force your way inside oncoming traffic. Junctions are a free for all with no traffic lights or give way signs but there is a free flowing, interweaving system that seems to work. It took me a while to get the idea, but now I can weave through the traffic on my bike with the best of them.
You get used to seeing bizarre loads on bikes and cease to be amazed.

You see whole families doing the school run and sometimes the driver seems just old enough to go to school! Safety first is not something that appears to be a priority particularly wearing a crash helmet.

Ladies of a certain age favour the wide-brimmed hat; men think that a baseball cap on back to front confers magical protection but the people who really get my blood boiling are the parents with a helmet and their young child perched precariously in front with no protection at all.

The number of cars is relatively small compared to the population at 21 cars per 1,000 people (compare to the UK at 519 per 1,000). Road conditions in Cambodia are far from ideal; in towns the pavements are packed with food stalls and shops tend to spill out over the pavements forcing pedestrians into the road, there are many potholes and the storm drains are blocked with rubbish so that when it rains the road resembles a canal. However, car sales are on the increase especially in the “grey import sector” where secondhand vehicles are imported with dubious origins and no guarantees of safety.

The paved roads in Cambodia were built in the 1920s and 1930s and designed for “light vehicular traffic”; the years of war, floods and increased traffic mean that these are now in a poor state and although there appears to be some rebuilding inter-province, for example between Battambang and Siem Reap, the rate of build is not in step with the increase in traffic. Similarly, traffic on rural roads around the Tonle Sap area has been predicted to grow by 12% annually and as these roads are improved to cope with seasonal flooding, the temptation is to drive faster and often under the influence of alcohol. There needs to be a fully integrated road safety campaign in schools and an education and training programme for drivers and road users. Sadly the numbers of accidents will continue to increase until these programmes are in action.