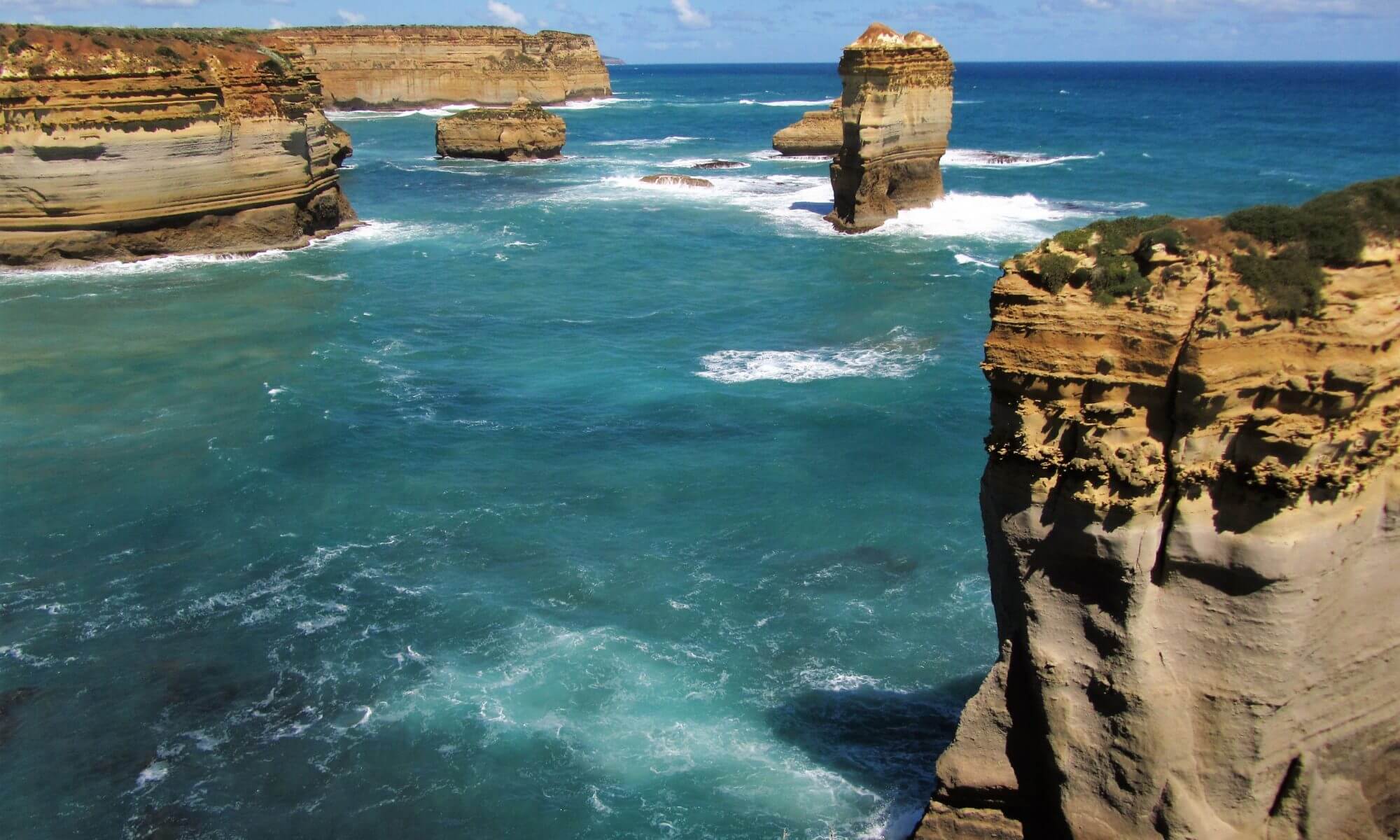 As mentioned in previous blogs, my trip to Australia was not about doing things but seeing people; however, the happy juxtaposition of driving the Great Ocean Road (GOR) and the Coorong with friends was too good an opportunity to miss!

DAY 1: In Melbourne, I rendezvoused with my Adelaide friends and the first stop was provisioning in Melbourne’s amazing Prahran Market. As foodies we had the time of our lives going around and trying things which you are encouraged to do by all the stallholders, keen not only to close a sale but to share their passion for good food. The market had one unusual stall – a specialist Turkish Delight shop and we bought a selection to accompany morning coffee! There was also a patisserie which made pasteis de nata – those delicious little Portuguese mouthfuls of custard tarts and we had to try some of those…
What is the GOR? It was built by returning soldiers from the Great War and was started in 1918 and opened to the public in 1932. The workers hacked the road out of the coastal cliff with hand tools, using only horses and carts; it is an amazing feat of engineering which opened up this remote corner of Victoria – the mayor of Geelong, Howard Hitchcock, was the man with the drive behind it and he had the vision to realise that not only was the road improving rural connections but that it would become a great tourist attraction and bring much needed revenue to the area. It also acts as a permanent memorial to those who died in WWI.

The GOR starts at Torquay and follows  the coast to Apollo Bay. Our first stop was Split Point Lighthouse where in addition to the spectacular coastline we saw and heard the rufous bristlebird whose habitat is coastal scrubland – the destruction of which is pushing this bird into “threatened” status. The drive along the coast through Lorne towards Apollo Bay was extraordinarily beautiful but the skies continued to darken, rain set in and the temperature dipped to 13C. We decided to abandon driving for the attraction of a warm cabin in Apollo Bay and we wrapped up and wandered along the beach to the pub.

DAY 2: The road out of Apollo Bay turns away from the coast to cut across Cape Otway and we made our first stop at Mait’s Rest Rainforest Walk on the edge of the Great Otway National Park. This was a wonderful opportunity to wander along boardwalks through very ancient tall trees and huge tree ferns.

A little further on, we turned off the GOR and took the road to the Cape Otway Lightstation which passes through the National Park. We had been told that if you see a gaggle of cars at the roadside then it is probably “koala spotters” and as we rounded a bend in the road, that is exactly what we came across. Yet to see my first wild koala, I Ieapt out and found myself in conversation with some French tourists regarding the koala that had just disappeared from view! On we went and were rewarded at the next spot as there was an obliging koala asleep in the crotch of a tree and a photo opportunity for all.

As we were driving along, I realised that a lot of eucalyptus trees were dead or dying and this is because the koalas are literally eating themselves out of their habitat. Some attempt has been made at population control in the National Park but clearly this is an ongoing problem.

The “shipwreck coast” of Victoria runs from Cape Otway to Port Fairy, a distance of 130 km and is a limestone coastline with treacherous currents and huge rock formations, the most famous of which are the 12 Apostles. It is estimated that over 600 wrecks litter this coast of which only 240 have been found. The coast is dotted with lighthouses and Cape Otway Lightstation is the oldest surviving lighthouse on mainland Australia and one of the most significant. Cape Otway would have been the first land fall seen by thousands of immigrants after months at sea.

In glorious sunshine, we did a little off-roading along a sandy track which led us up to cliffs above the Gellibrand River estuary and the GOR footpath . With spectacular coastal views we enjoyed the wonderful spread of cold meats and dips we had bought at the market. This estuary is an interesting area with plenty of board walks to give access to birders. We were lucky enough to see marvellous aerial displays by swamp harriers and the area is home to a number of endangered species such as the Australasian Bittern, Powerful Owl, Lewin’s Rail and the Hooded Plover.

(Just an aside about walking the GOR – it is now on my long-distance walks to do list! It is over a 100 km in length and runs along the clifftops from Apollo Bay to the 12 Apostles.)

From Gellibrand we carried on along the GOR to the most well-known section – the 12 Apostles which lie off the coast from the Port Campbell National Park. This limestone coast has been eroded by the sea, forming caves in the cliff face – eventually these caves became arches and when the arches collapsed the stacks were left. Interestingly when Victorian tourism named them the 12 Apostles there were only 9 stacks – further erosion has reduced the number to 8! There are many fantastic coastal views including the Loch Ard gorge, scene of an infamous shipwreck and the Bay of Islands – all absolutely stunning especially as the sun was shining. We reached Port Fairy pretty exhausted and collapsed in our cabin. My host, despite having driven all day, very gallantly did the decent thing and cooked huge steaks on the BBQ which we washed down with a very good South Australian red. Another day in paradise!

DAY 3: Port Fairy is a lovely little fishing town and we did a very windy walk around Griffith Island which is the site of another lighthouse and an important breeding ground for the short-tailed shearwater or muttonbird. These birds come ashore to breed in November and lay one egg in burrows about a metre long; the young hatch at the beginning of January and are fed by their parents until April when the parents leave on their migratory path north to the Arctic; the chicks are left to fledge on their own and about a month after their parents, they will begin their migration, unaided by mature birds.

Continuing our road trip, we crossed the state border from Victoria into South Australia and headed away from the coast and up to Mount Gambier, famous for its Blue Lake which nestles in a dormant volcanic crater and is an important water source for the surrounding area. From there to Coonawarra, a wine-producing region in the Limestone Coast area; the vineyards thrive on the terra rossa soil and the area is famous for cabernet sauvignon, shiraz and merlot wines. The afternoon was getting late but we managed to sneak in a couple of tastings at Zema Estate and Bellwether Wines. We drove on to Robe which is a small town on the coast and found our cabin – we went into town for a pizza and some craft beer which was 10$ a bottle – shocked!

DAY 4: The last day of our trip dawned overcast and I had an early morning stroll along Long Beach – it was fantastic to have 20 km of sand to myself. Back on the road we headed up to the Coorong which is a lagoon ecosystem stretching from the mouth of the Murray River 130 kilometres south, bordered on the ocean side by the Younghusband Peninsula. It is a truly remarkable environment where the brackish water in the lagoons supports a diverse population of birds, wildlife and flora. We drove along the Old Coorong Road which is a dirt track and marvelled at the number of skinks crossing the road in their own time!

We cut through the dunes at 32 mile crossing  and enjoyed driving along the beach to 48 mile crossing. We ate our leftover pizza and drank a beer in the sunshine – welcome to South Australia! Further along we stopped to

observe the pelican breeding ground and were rewarded with some excellent views of these wonderful birds – they really should not be capable of flight!
So now we were heading for Adelaide and home, crossing the Murray River by ferry and finding a wonderful vineyard in the Fleurieu Peninsula, called Fleurieu Hills. Run by a very hospitable family and producing wonderful still and sparkling white wines from Pinot Gris grapes – they also sell cherries and produce a cherry liqueur which is great on ice cream or in a fruit cup. We decided to end our holiday with a meal at the Victory Hotel overlooking Sellicks Beach and we watched the sun go down over the ocean on what had been a truly remarkable trip of a lifetime.